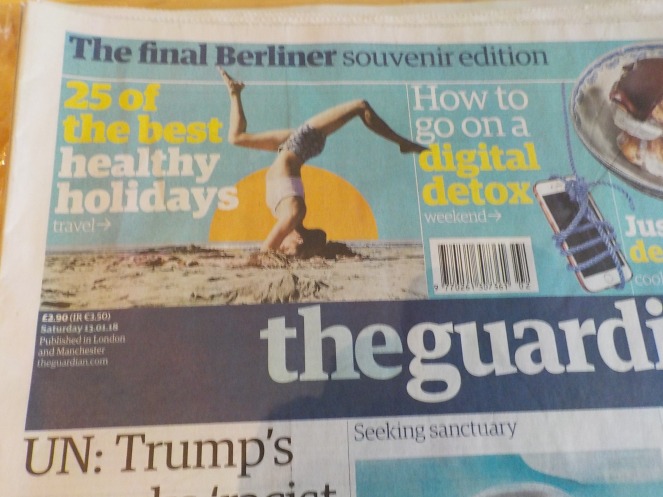 The final Berliner format Saturday edition of The Guardian, which will become tabloid from tomorrow, Monday.
Worrying about the shape of a newspaper is such a first world problem. Privilege needs to be checked. I could never understand why there couldn’t be quality writing in a tabloid format, then a journalist explained to me few years ago why tabloid size and shape aren’t amenable to long or densely argued articles. Although it made sense at the time, I’ve completely forgotten the gist of her explanation…
I’m sure everything will be fine even as “that pinko comic that you read” becomes more comic sized.
This has been my first blog post in ages, at least, since last October. Nothing bad has kept me away, apart from a natural antipathy to sitting at a computer and laziness…life has gone on at its usual intriguing pace, every day something delights or engages me.
The lack of posts drives the webmaster crazy, quite rightly. Sorry Chris.
To that end, although I don’t do New Year resolutions, I’m saying here that I will aim to post something every day from now on. There’s always something amuses or enchants me.
2017 was a great year, effectively a gap year which has allowed me to look around and breathe for awhile. A gap year in one’s late fifties is tremendous, I wouldn’t have known what to do any younger – and at least I paid for it rather than fawning parents. Lots of good things happened.
I’ll be starting a new job in a couple of weeks, so to an extent fun time will be curtailed. I have, however, learned more about what I consider to be fun in the last year and have also learned a much clearer form of self-determination.
A few weeks ago I had the dream of all my teeth falling out into a cupped hand. This is supposed to be a very common dream, although I’ve never had it before and no-one I have spoken to about it has had it either. Apparently it symbolises looking forward to a change…
My old dentist Alison gave me these casts of my teeth a few years ago. Truly one from the Bumper Book of British smiles, a real knocked over graveyard full of 1960’s choppers.