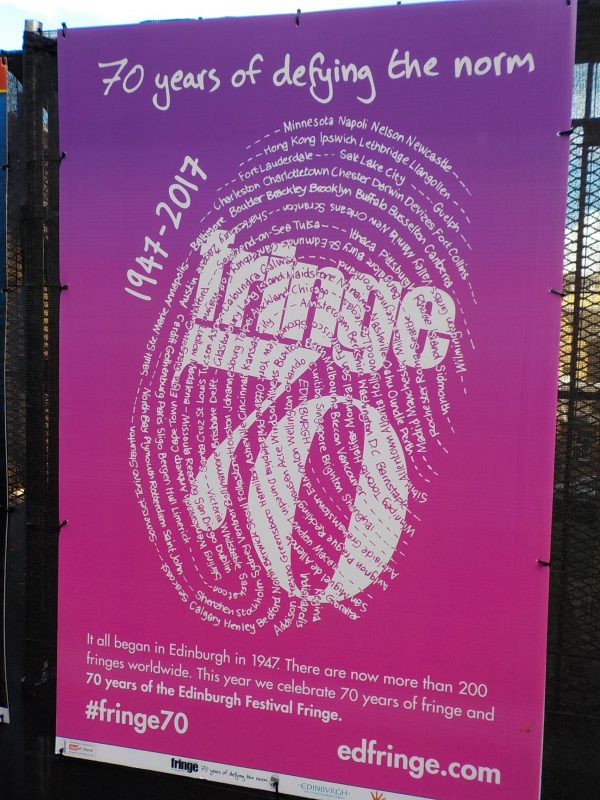 Saturday 19 August.  Turned out to be a great day!

Shakespeare on a Shoestring’s Cymbeline was an inauspicious start – while the production itself was fun, witty and energetic, I had to ask a man with an SLR and a woman with a bright iPhone sitting in front of me to put them away…again, a production by an American school, so possibly something of a vanity production which parents would want to photograph and film to death…I think we will be avoiding the schoolies in the future.

A couple of hours later we saw Essential Theatre‘s reading of Julius Caesar and it was superb. A female cast delivered a powerful distillation of the play in just over an hour; wonderful acting and passion. This is the sort of thing that makes attending the Fringe so sweetly fruitful, to suddenly and unexpectedly come across theatre of the highest standard for a few pounds, brought to us by people who have travelled halfway around the world to be here, Australia in this case.  Thank you, Essential Theatre!

I had no idea what James Rowland’s A Hundred Different Words for Love was going to  be like and it turned out to be the second excellent show of the day.  A monologue about meeting the girl and losing the girl set to occasional looped piano accompaniment (truly the year of the loop pedal at this year’s Fringe,)  it was unusually touching.  Great writing and performance in a lovely atmosphere, the Anatomy Lecture Theatre in Summerhall, which is acoustically perfect.  They knew how to build lecture theatres back then…

St Peter’s Church in Lutton Place hosted C theatre‘s stunning Shakespeare in the Garden; The Tempest. This is the same company who do Shakespeare for Breakfast and Dickens for Dinner, which I’ve already eulogised.  This is a more traditional take on the work; in fact, entirely traditional as it takes place in the open air in the gardens of the church.  I just loved this meticulous production and marvelled at the projection of the actors who had naught but the open air to work in, the lightness and charm of the direction.  This is fast becoming my favourite part of the Fringe –  I first saw this last year, I think it was Twelfth Night and look forward to next year already.  These people can turn their hand to anything.

The last show was a name comedian of which I can remember nothing, sadly.