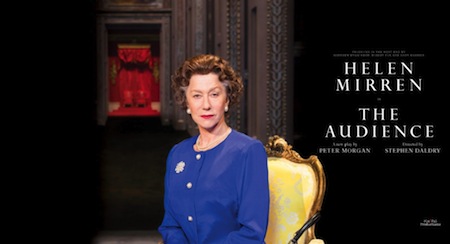 On Saturday I watched the cinema broadcast of Peter Morgan’s The Audience, directed by Stephen Daldry.

It was the third or fourth of these live broadcasts of the National Theatre I’ve seen and easily the most successful. Everything I’d seen so far had an uneasy aesthetic about it; was this theatre dressed up as cinema, or theatrical cinema? The idea of having cameras inside the theatre to translate the actors from the stage into numerous cinemas around the world, in real time, seemed problematic. We don’t see a theatrical performance from multiple angles, there is no intercutting or montage – these are among the things which make film a unique artform. To press these onto a performance of a play can seem like re-directing that which has already been directed.

The Audience came from a smaller theatre, hence there was (I guess) a three-camera set-up, which was much more pleasing, with certain qualifications.
The play itself is pretty good and a great way to spend an evening, an imagining of what may have gone on at the private, un-minuted weekly meetings Queen Elizabeth II has had with her Prime Ministers throughout her reign. Richard McCabe and Haydn Gwynne are outstanding as Wilson and Thatcher, while Helen Mirren effortlessly reprises her Queen-ness.
(I don’t know McCabe, but Gwynne played the office manager in Drop The Dead Donkey, which at the time was hilarious – now it would be taken as a documentary.)
I did wonder why not all PMs were represented; Heath and Blair were in charge during two of the most tumultuous periods of recent British history and were only referred to; Heath, in particular, would have been fascinating as he has been recorded as rude and awkward both verbally and in manner.
On a more pedantic note, I don’t think Eden would have offered, in 1956, to “bring [the Queen] up to speed…”

As for the broadcast elements, although the simpler, three-camera presentation was more pleasing to the eye, almost every shot slowly panned in to the actor who was speaking, which became predictable. Neither were there any shots of the on-stage costume and make-up changes on Mirren, which action clearly pleased the live audience; the applause between her representation of the Queen speaking to Major in 1976-ish and becoming the young Queen of 1952, putting Churchill in his place about a minute later, was purely for this transformation.
The one jarring note about these broadcasts is the screen presence of Emma Freud (daughter of, great-grandaughter of and niece of various other Freuds,) who seems to have subscribed to the Davina McCall school of talking down to the audience. At least on this broadcast there was the uneasy pleasure (for us) of her teeth-grinding (for him) interview with the writer during the interval.