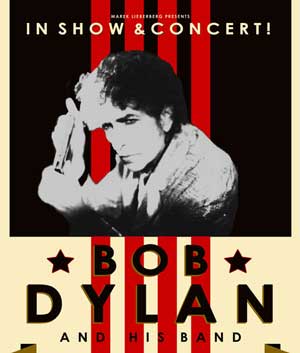 The other day I was sort of relieved not to be able to get very good tickets to see Bob Dylan “In Show & Concert!” (he’s had so much fun with variations on that ridiculous phrase over the years) in November.
Why relieved? Well if I had succeeded in getting anything in the first ten rows, I would have had to have gone on what has become the incredibly wearing schlepp to the Clyde Auditorium in Glasgow. It’s a nice venue, but it takes ages to get there (and back) from Edinburgh, a city which sadly has nothing in the 4,000 and up concert venue line, although for trams, we will be fine.  Three nights of Dylan in Edinburgh would have been a no-brainer if travelling time was less than four hours (as would, recently, Rush, Neil Young, maybe even The Who…)
As for the Laura Marling shows in London…despite the kind offer of a place to stay in Tonbridge, I just couldn’t get the energy together for what will probably be the greatest shows ever. Even though you know this, sometimes you just have to let it go.

Age encroaches. We’ve lost a lot of good people too early recently so I wouldn’t make light of preferring ageing to its alternative while I still carry only one life threatening condition. Still, it’s rushing by…let me illustrate with a few examples.

I really like these reproduction school satchels in brightly coloured leathers that are out just now; I doubt if a male with even as developed a sense of style as I have could get away with one in Gorgie, Edinburgh, so it’s probably a no-go for me.  However my eye was caught the other night by one getting on a bus, attached to a woman has been a friend of mine for a long time. I noticed how old she looked, then realised this was not unsurprising given that I am only about three years older than her.
She didn’t come upstairs, so we didn’t make conversation. At the level of gallantry my brain was on, that’s probably just as well, and I was listening to Laura Marling’s new album. A lovely woman nonetheless.
Yesterday, I was speaking with another old friend on the phone, who came out with a sentence I had not yet come across in life, viz, “I need to buy a dinner suit.”
When I asked him why, he said he was fed up with hiring dinner suits. This was taking a weird twist, I felt.
“Why do you hire dinner suits? For business things?”
“No, for parties. You know how it is…”
“No.”
“Well, people invite you to these things and expect you to dress in a certain way…”
I had to point out that no party I had ever been invited to had required the penguin suit; a dinner suit to me is a combination of one’s clothes and slovenly eating.
We were clearly on different planets at this point. What have I lost here? Or what have I gained? I will never wear a dinner suit…I will never play The Dane…

Finally, going to see Bruce Springsteen in Glasgow tomorrow evening needs two days off work; one to make sure I have descended on Hampden in time for the show and a second because we’re staying over to have a relaxed journey back. I remember the days I would have been driving my orange Mini to Hampden and back, overtaking BMWs on the M8.
So for the second consecutive set of shows in Glasgow, I’ll be missing Bob again. At least we’ll always have Barrowlands.

One thought on “Bruce Springsteen is 63. I am not. And yet…”