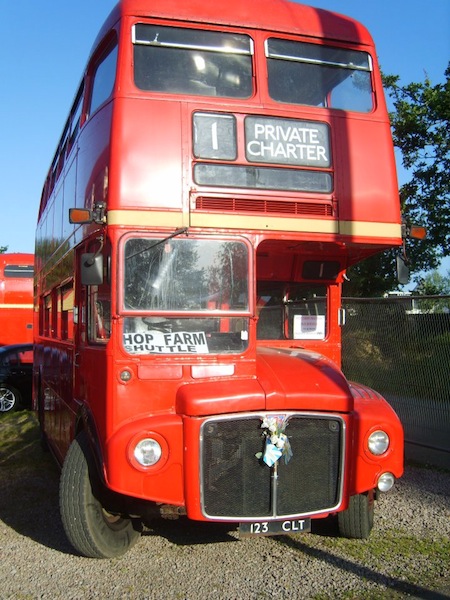 Hop Farm. On to Sunday and the last day of the festival…on to cider today. Sadly, I can’t remember which brand it was, but it seemed a good way to start and indeed, continue, the day.
For the first time, the weather wasn’t too promising; in fact there was some rain, which lasted for about half an hour, but I guess in terms of what fell at other UK festivals this year that’s nothing to complain about. It did mean that we stayed in the tent housing the Bread & Roses stage for quite a while and watched the whole of Lights’ set. Lights are a North American combo who seem beholden to a certain sound from the eighties – if I say everything they played was a derivative of Little Red Corvette, you’ll get the picture. But that’s not all bad, and they did make an attempt to put on a bit of a show and engage with the audience.
A consequence of being in a field with a load of bands for three days is that you come across and listen to some things that you normally wouldn’t; so I was surprised to quite enjoy some of Athlete, who’ve never really appealled before (great bass guitar sound) and surprised how good The Psychedelic Furs were as they distracted me on a drizzly trip to the bar. I don’t remember their records having sax all the time over everything, but there you go, maybe their current sax player (who plays all the time, over everything) is somebody’s mate.
I would have liked to have seen more than a couple of songs by Kool & The Gang, but I was by that time on the way to the Big Tent to see Ian Hunter and The Rant Band, another of the handful of acts I definitely wanted to see.
I haven’t seen Hunter since he was in Mott the Hoople in the very early seventies (which was probably the first proper rock show I went to.) There were a few Mott the Hoople reunion shows a couple of years back, but as much as I hoped there would be a bigger tour, it didn’t come to pass – maybe there were just too many unresolvable issues between the members of the band…anyway, Ian Hunter and The Rant Band is a pretty entertaining propostion and he did bring on Mick Ralphs for All The Young Dudes right at the end of the set. I imagine Tommy Saxondale may have been stage managing…
We then waited for Gilbert O’Sullivan, who was also on my list of want-to-sees…and waited, then waited a bit more. His crew were being very fastidious about setting up the stage and it looked like it was going to be a big band, about ten pieces. There was quite a bit of tension as the stage was being set and it seemed (probably was) the longest changeover of the whole weekend.
Which would have been nice if it had all been worthwhile, but when the band eventually kicked off the first song (lovely sound) and Gilbert started to sing, there was one thing missing.
Which was the lead vocal.
You’d think somebody would have noticed, sharpish. Then I realised that the whole band had in-ear monitors; they were blissfully unaware of this lack of melody, lyrics, voice…they seemed to be getting Right Into It, in fact.
First song over, there was an amount of loud protest from the audience, but of course, the artist and his band were unaware of this and probably took what they could hear as rabid approbation. Some people at the front were trying to draw Gilbert’s attention to what was happening, but he didn’t have a clue. They launched into the second song, then the third…by this time, somebody should really have been wondering at the chants of “off, off,” which were starting; certainly, if the artist was even vaguely aware of what was (not happening) he may have wondered why his greatest song, Nothing Rhymed, was merely stirring up howls of protest.
Did the guy on the mixing desk have in-ear monitors too? Maybe…
It was about the fifth song when some lead vocal came through the mix, not loud, but at least there; and only after the sixth song did Gilbert get up from the piano and go and have some presumably terse words in the wings. He then checked with the audience; “So; am I right? You didn’t hear any vocal on anything so far?” The poor man shook his head at the affirmative reply…
That all kind of put a damper on the rest of the set, which deflatedly trundled along and I imagine someone in his organisation was no longer in his organisation after that night.
Happily, I’d missed Richard Ashcroft and there was time for a quick grub break before getting back to the main stage to catch Suede, who were much better than they had any right to be. These guys certainly still know how to work the stage and the audience (I saw them a couple of times when they started out;) but once again, the finger-deadening cold was setting in and as good as Suede were proving to be, getting back to the car and going home for some wine was fast becoming a preferred option.
So, goodbye to the Hop Farm for 2012. Probably as civilised a festival experience as could be had.

Thanks to Marie for the picture again.